SF Pride for Human Rights and in Honor of Bradley Manning

2013-07-06 "1000+ March for Bradley Manning in SF Pride"
from "World Can't Wait" SF Bay Area Chapter [www.worldcantwait.net/index.php/reports-on-protest-resistance/8309-1000-march-for-bradley-manning-in-sf-pride]:
[www.worldcantwait.net] [www.sfbaycantwait.net] [sf@worldcantwait.net] [415.864.5153]
---
In San Francisco's biggest-ever Pride parade, this year the Bradley Manning contingent was the largest of all the non-corporate contingents. Organized by the Bradley Manning Support Network, over 1000 people marched, sang, blew whistles and chanted, lofting a forest of huge Bradley Manning banners and rainbow-draped signs.
Marching up Market Street, the "Free Bradley" flash mob repeatedly broke into its defiant dance routine (to Michael Jackson's "They Don't Really Care About Us") and the Brass Liberation Orchestra laid down a bold marching beat. Elders were in the middle, riding a cable car decked out with Bradley pictures. Daniel Ellsberg, the Vietnam War whistleblower who has been on the frontlines of the political and legal battle to defend and free Bradley Manning, rode in Bradley's "grand marshal" place of honor atop a shiny green pick-up truck.
This is the third year this contingent has marched in SF Pride and our previous contingents, even though much smaller, were met with applause and cheering (yes, mixed with jeers of "Traitor!"). But this time whole sections of the spectators would roar and cheer, grabbing for the flyers and stickers, and often some would clap and chant with us. At one corner, a young woman spotted our signature orange signs and starting chanting: "The World Can't Wait! Free Bradley Manning!" (Which we took up gladly.)
Word everywhere was that the contingent's numbers swelled in direct defiance and disgust at the Pride leadership;s two months of reactionary, pro-military refusal to have Bradley Manning serve as a parade Grand Marshal after he was chosen by Pride's normal committee process. This has caused a very big split in the LGBT community that's been spreading; this may have amped up the loud, proud love we were getting from the crowds, especially when we marched by chanting, "THEY say court martial, WE say GRAND MARSHAL!"
The SF Bay Guardian had printed a full-page "We Are Bradley Manning statement, complete with a Bradley face mask to cut out and wear at Pride, and Bradley masks were everywhere. Bright orange and pink Bradley stickers were on lots of people in other contingents. And news just broke that the Pride organization's lawyer of many years has just resigned over their diss of Bradley Manning. A man who helped carry World Can't Wait's banner was from Latin America, and had specifically come to the U.S. to march in a Pride parade. As he was trying to decide which city to come to he read about the Grand Marshal controversy, and headed straight for San Francisco!
"L, G, B, T, Bradley Manning Speaks for Me! L, G, BTQ, Bradley Manning speaks for you!"
"Whistleblowers are Heroes, FREE Bradley Manning!"
Signs and chants mentioning the name "Wikileaks" drew loud cheers and thumbs-up, too. Maybe for many people, the NSA spying revelations are fresh on their minds: they've just learned their government has been monitoring everybody's every phone call, text, email. Watching audience expressions as the flash mob danced for Bradley, and as they heard and very often joined in the chants you could feel a mood, a vibe: a lot of people have a positive reaction to Bradley Manning. They've been paying attention, they think he's done something good in the world, and they don't want him locked up for life for telling the truth about crimes and lies of the government.
There's more. Weeks after the Pride leadership denied the Grand Marshal honor to Bradley, it had invited military recruiters to set up shop inside the Festival, for the first time in the entire history of SF Pride. Outrage all around, as the news spread.
Immediately at parade's end, about 50 people from the contingent swam their way thru the sea of the crowd, heading into the Festival plaza. They found the recruiters, and with the help of the Brass Liberation Orchestra began loudly pointing out this danger zone where young people could be preyed upon. Young and older vets (women and men), World Can't Wait, young women rebels (motorcycle boots, tutus, tattoos), Code Pink… people did some testifying, and then decided to protect the festival and community from harm. Everyone stood close together and linked arms, forming a tight human circle surrounding the recruiters' booth on two sides (our banner took care of a third side). A couple of Iraq/Afghanistan vets powerfully bull-horned the message and we did more chanting. This spirited encirclement went on about an hour.
People made up some great chants on the spot:
“Recruiters don't belong at Pride, We're on Bradley Manning's side!”
“Fuck your wars, we don't need 'em: All we want is total freedom!”
“1-2-3-4, Stop Sending Kids to Die in Wars”
“Don't Forget ‘Don't Ask, Don't Tell’ -- Military GO TO HELL”
As we headed out people talked about this quick action being a fit response to the recruiters debut at SF Pride, and the need for organizing work to keep the recruiters out of Pride 2014. 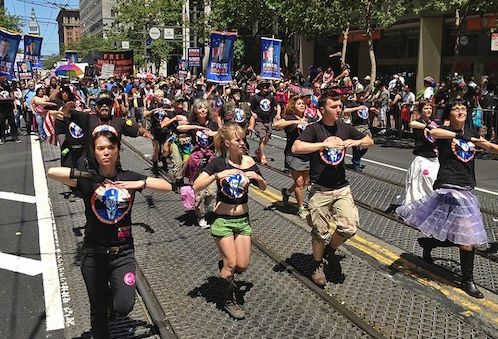 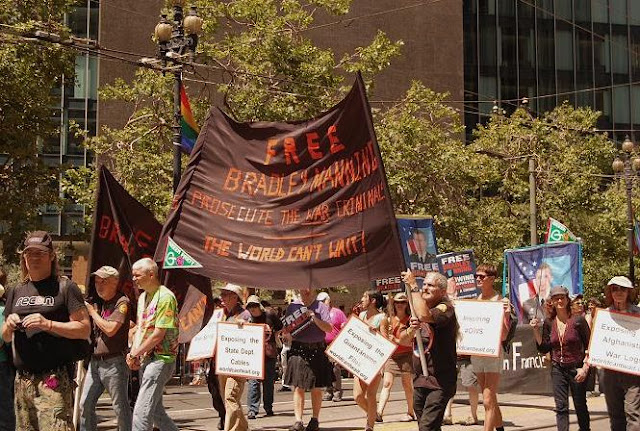 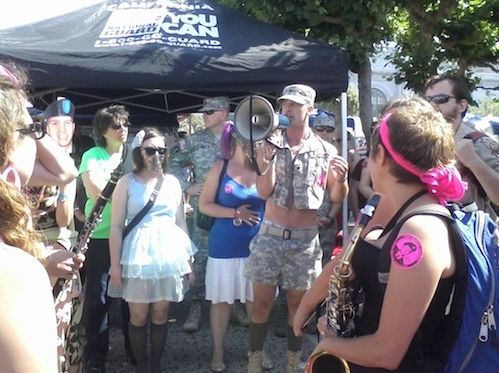 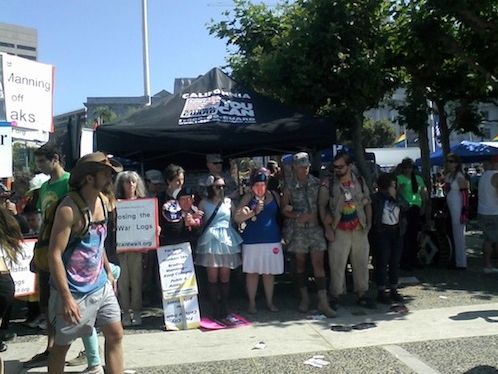 Posted by Anonymous at 9:25 PM