Register to vote with the Peace and Freedom Party
HTTP://REGISTERTOVOTE.CA.GOV
The Peace and Freedom Party is committed to socialism, democracy, ecology, feminism and racial equality. [www.peaceandfreedom.org]. Download this page as a 4 page flier at [http://www.csulb.edu/~eruyle/why-ecosoc-reg-pfp.pdf], Produced by Gene Ruyle for the Campaign for Peace and Socialism [ru4peace.wordpress.com] [cuyleruyle@mac.com] [510-428-1578]

Defeat Climate Change with System Change!
"A human being is a part of a whole, called by us "universe," a part limited in time and space. He experiences himself, his thoughts and feelings as something separated from the rest… a kind of optical delusion of his consciousness. This delusion is a kind of prison for us, restricting us to our personal desires and to affection for a few persons nearest to us. Our task must be to free ourselves from this prison by widening our circle of compassion to embrace all living creatures and the whole of nature in its beauty."  — attributed to Albert Einstein

Formed in the anti-racist and anti-imperialist struggles of the sixties, the Peace and Freedom Party has the strongest ecological stance of any ballot-qualified party in the United States. Alone among ballot-qualified parties, the Peace and Freedom Party locates the cause of our ecological crisis in capitalism and understands that any real solution must involve socialism. The Peace and Freedom Platform clearly states our position on capitalism, socialism, and ecology: "The same corporate forces and economic system that exploit and brutalize the world's working class people are destroying the world's biosphere. These social policies and ecological destruction often overlap. Socialism is necessary to end the ecological destruction caused by capitalism. Our goal is a society that is in harmony with nature as it is in harmony with its own people." 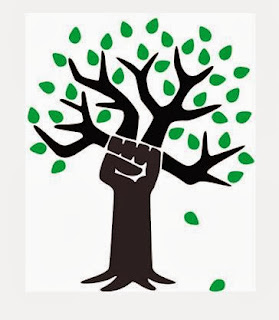 As early as 1970, before there was a Green Party and before the term ecosocialism was even coined, the Peace and Freedom Party included ecological concerns in its socialist program, with a call to: “Save the environment by prohibiting pollution, waste of resources and destruction of nature for profit.”
Ecological concerns have always played an important role in the Peace and Freedom program. In April 2011, the State Central Committee of the Peace and Freedom Party endorsed the Universal Declaration of the Rights of Mother Earth, adopted at the World’s People’s Conference in Cochabamba, Bolivia in April 2010.

Our foundational opposition to U.S. imperialism includes recognition of its role in destroying the Earth. Not only is the U.S. military the biggest polluter on the planet, it protects and serves the same corporate forces that are systematically pillaging the Earth and paving the way to eco-destruction.

As a non-sectarian, multi-tendency party, Peace and Freedom welcomes the participation of members of other socialist groups. For example the Party for Socialism and Liberation, Socialist Organizer, the Socialist Party, the Communist Party, and the Freedom Socialist Party have all been active within our ballot-qualified party. Our bylaws protect the formation of tendencies and the expression of various viewpoints.

Peace and Freedom is not a vanguard party seeking to emulate the Bolshevik Party of 1917, although we respect such vanguard parties and welcome their participation. We provide an electoral alternative to the war addicted, pro-capitalist parties that dominate U.S. politics. In an era of the unchallenged supremacy of capital, it is worthwhile to have a political party, however small, to offer an alternative to the twin parties of corporate capitalism, unending war, and ecological insanity. Whatever its shortcomings, the Peace and Freedom Party has been uncompromising in our opposition to imperialism, uncompromising in our support for people’s struggles in California and throughout the world, and uncompromising in our support for the defense of our Mother Earth.

Many socialists of difference kinds—ecosocialists, democratic socialists, libertarian socialists, revolutionary socialists—feel it is important to publicly declare their opposition to capitalism. There is no more effective way to do this than by registering in the socialist Peace and Freedom Party.  Given the hegemony of bourgeois ideology, this may seem futile. But as Marx and Engels wrote concerning the importance of electoral activity even in the worst of times:

"Even where there is no prospect of achieving their election the workers must put up their own candidates to preserve their independence, to gauge their own strength and to bring their revolutionary position and party standpoint to public attention. They must not be led astray by the empty phrases of the democrats, who will maintain that the workers' candidates will split the democratic party and offer the forces of reaction the chance of victory. All such talk means, in the final analysis, that the proletariat is to be swindled. The progress which the proletarian party will make by operating independently in this way is infinitely more important than the disadvantages resulting from the presence of a few reactionaries in the representative body." (London, March 1850)

As we participate in a flawed and undemocratic electoral system, we recognize that our goals cannot be achieved by electoral means alone. We participate in mass organization and direct action in neighborhoods, workplaces, unions, schools, and the armed forces everywhere.
While organizing for the future, we work in the present, challenging the system with immediate and transitional goals, including:
·  shut down the war machine and bring our troops home,
·  guaranteed employment, with a dignified guaranteed income, free education and health care for all,
·  open borders and full rights for immigrants,
·  end all discrimination against immigrants, women, LGBT, and minorities, with marriage equality.
·  no compromise in defense of our Mother Earth.
Our personal and political freedoms are under sustained attack by the forces of corporate capitalism which include both the Democratic and Republican Parties. Signing petitions, demonstrating in the streets, and direct action are all important, as is an electoral challenge informed by the working class science of socialism.
If you share our values, join the resistance by registering Peace and Freedom Party at [registertovote.ca.gov]
Posted by Peace & Justice at 7:25 PM No comments:

The Act is registered at the State of California [lao.ca.gov/laoapp/ballot_source/BalDetails.aspx?id=916], where it is described as follows: "This measure imposes a 15 percent “severance tax” on the value of all oil and gas extracted in California or its state offshore waters, which extend out three miles from the coastline. Oil and gas produced in federal waters would be exempt, and wells capable of producing less than ten barrels per day of oil or 60,000 cubic feet of gas per day would be exempt when the value of a barrel of oil or gas from those wells was $50 or lower. The measure states that the costs of the tax may not be passed on to consumers."

The Act is authored by Peter Mathews [562-234-3319] [epetermathews.com], who relates the following:
"When I first started teaching in California Community Colleges in 1976 my students paid no tuition. They were only required to pay a $6 service fee for all 15 units. If you paid the same rate today that Arnold Schwarzenegger paid as a student in the 1970s at Santa Monica College ($6 for all 15 units) you would be paying only $24 today because of inflation. Lets bring back these rates by asking your Assemblyman and State Senator to sponsor the OIL TAX TO FUND EDUCATION ACT (this Act prohibits passing on the oil tax in higher gas prices), of which I am the lead author. This bill is ready to be introduced into the California State Assembly and/or the California State Senate, in legal language."
Posted by Peace & Justice at 4:32 PM No comments:

End the permanant state of war! 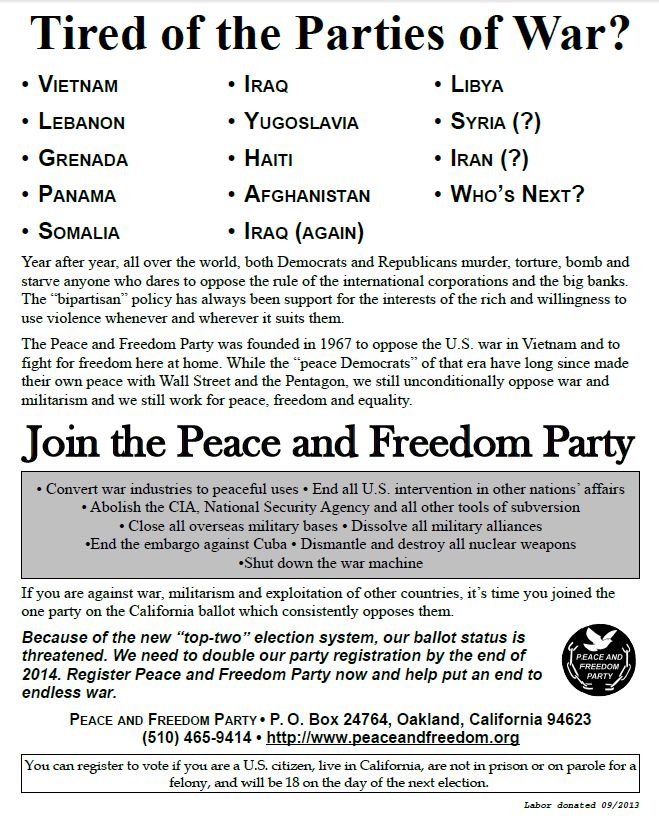 Support Peace and Freedom on the ballot

Checks made out to “PFP Registration Drive” should be mailed to:
PFP Reg Drive, PO Box 22234, Sacramento CA 95822,
or you may donate on-line at: [www.peaceandfreedom.org/home/regdrive].

Message from Peace and Freedom Party Registration and Organizing Committee:
The 2012 elections brought us more of the same: war and oppression abroad, austerity and repression at home. Across the nation progressive community activists are responding by working at the local level to effect the change we’ve learned not to expect from our elected representatives. A Gallup poll shows that over half of voting age Americans want a third political party.
The Peace and Freedom Party was born of the anti-war and civil rights movements in the 1960s. We have run candidates who have supported reductions in the military budget, single payer healthcare, full employment, and free education as a right. Our activists build local clout and awareness on these issues and more, connecting the peoples movements to electoral politics without knuckling under to the super-rich who control both big parties.
Peace and Freedom is again going national. We are now a ballot qualified party in Florida as well as California, and working toward ballot qualification in several other states, and we are building a national organizing committee.
Due to changes in election law, the Peace and Freedom Party must sharply increase our voter registration numbers from approximately 62,000 registrants to about 105,000 registrants by the end of 2014 in order to stay on the ballot in California. We will do it, but it is a difficult and costly process, and we anticipate raising and spending about 85 thousand dollars on it. If you care about having a voice for peace and economic justice on the ballot, we urge you to help in the following ways:
Register to vote as “Peace and Freedom Party” if you live in California by filling out a new voter registration form, either by picking one up at a library, DMV office, or Registrar of Voters office, or by registering online at: registertovote.ca.gov. It would also be very helpful for you to encourage supportive friends and family to register Peace and Freedom. (In California today, you may vote for candidates of any party in both primary and general elections regardless of the party in which you are registered.)
Donate to the Peace and Freedom Party Registration Drive, no matter where you live. Your donation enables Peace and Freedom to train teams of youth organizers throughout California to register Peace and Freedom Party voters. Please join in enabling a new generation of progressive activists to secure a ballot alternative that reflects their ideals, addresses their concerns and champions their future.
Please spread this message to your friends. We appreciate any support you can provide. Thank you!
Yours for peace and freedom, Cindy Sheehan
(Organizations listed for identification purposes only.)
* Gerald Horne, PhD, JD, University of Houston
* John Reiger, President, Veterans for Peace, Sacramento Chapter
* Gloria La Riva, President, Typographical Sector, CWA Local 39521
* Mike Roskey, SEIU Local 1000, District Labor Council 767, President
* Alice Stek, MD, University of Southern California School of Medicine
* Kevin Akin, California State Chair, Peace and Freedom Party
* Paul Krassner, Satirist and publisher
* Kathleen Williams, Attorney at law
* John Fugelsang, Host of “Viewpoint” on Current TV
* Scott Camil, President, Veterans for Peace, Gainesville Chapter

Posted by Anonymous at 10:23 PM No comments:

Register to vote for Cindy Sheehan as next CA Governor... [www.peaceandfreedom.org]