Join us in Santa Cruz for Cindy Sheehen, and her EPIC Campaign for Governor 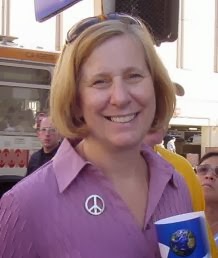 Cindy Sheehan, aged 56, is an internationally renowned peace and social justice activist.
Sheehan’s oldest son Casey was killed in Iraq on April 04, 2004 and many came to know about her and her work when she set up a peace camp near the faux-ranch of then president George W. Bush in Crawford, TX in the summer of 2005.
Since then, Cindy Sheehan, has traveled the world working with fellow activists demanding peace and working with others to help create a world that is peaceful and more economically secure and equal.
Cindy Sheehan is a native Californian who was raised in a California where education was excellent and other social safety nets were not as small and filled with holes so big, millions of Californians fall through while the rich and corporations keep exploiting more of this state's wealth and resources.
Sheehan majored in California History at UCLA and envisions a state that leads the world in peace, economic stability and equality, environmental sustainability and delivering high-quality public education from pre-K through university. She knows it can be done because it has been done before.
Cindy Sheehan has published seven books, been arrested for peace about 21 times, is currently a resident of Vacaville, CA and the mother of three surviving children and four grandchildren who are her love and her inspiration.
Posted by Peace & Justice at 12:34 PM No comments: