ELECTIONS 2014: Can’t afford your own politician? Come listen to ours.

The Alameda County Peace and Freedom Party and Movement presents...
Real solutions to the real problems caused by corporate capitalism.
Saturday, May 3, 2014 • 2:00pm-4:30pm
At the Starry Plough Pub, 3101 Shattuck Ave, at Prince St in Berkeley
FREE!   (But please buy food & drink at the Pub.)   FREE!

This is part of our on-going Socialist Forum Series on the first Saturday of every month.
Doors open at 2 pm and the featured panel will start promptly at 2:30 pm.
The forum will end by 4:30 pm, but folks can stay and talk as long as you like.
For information, contact: 510-465-9414

On Thursday, 4/24 at 3:00 pm, Cindy Sheehan, along with Marsha Feinland and Kevin Akin, were interviewed on the hourlong National Lawyers' Guild Show on KPFK in Los Angeles. Here is the link:
[http://archive.kpfk.org/mp3/kpfk_140424_150045lawyersguild.MP3].
\For more information about the California Peace and Freedom Party, please visit [http://www.peaceandfreedom.org].
Posted by Peace & Justice at 9:48 PM No comments:

End the Wars & Tax the Rich AND SAVE THE PLANET

Statement on Earth Day by Peace and Freedom Candidate Eugene E Ruyle, Candidate for State Assembly, 15th District [http://ru4peace.wordpress.com/2014/04/19/203/]:
As we celebrate Earth Day, it is important we keep in mind just who is threatening our beautiful plant. As Dr. King might say, the biggest purveyor of pollution on this planet is our own government, specifically the U.S. military. This was made clear in a report on one of the most unreported stories of 2010 by Project Censored, which states, in part: “The US military is responsible for the most egregious and widespread pollution of the planet, yet this information and accompanying documentation goes almost entirely unreported. In spite of the evidence, the environmental impact of the US military goes largely unaddressed by environmental organizations and was not the focus of any discussions or proposed restrictions at the recent UN Climate Change Conference in Copenhagen. This impact includes uninhibited use of fossil fuels, massive creation of greenhouse gases, and extensive release of radioactive and chemical contaminants into the air, water, and soil.“ (“US Department of Defense is the Worst Polluter on the Planet,” October 2, 2010)
World’s Worst Polluter?  The U.S. Military.

Perhaps it is time that we ask that leading environmental organizations, such as 350.org, the Sierra Club, and Greenpeace, recognize this fact and call the U.S. war machine to task. While it is essential that we continue to protest fracking, the Keystone XL Pipeline, and GMOs, we can’t let the war-mongers themselves off the hook.
But the worst environmental impact of the military is its role in maintaining the global system of corporate capitalism that puts profits before people and the planet and is destroying our Mother Earth. The Peoples of the Earth would have put an end to capitalism before now had it not been for the military invasions of places like Korea, Vietnam, Panama, Yugoslavia, Iraq, and Afghanistan as well as CIA subversion in Iran, Guatemala, Cuba, Chile, and everywhere.
Our Peace and Freedom Party was concerned about the destruction of our planet even before the first Earth Day, and our earliest platform in 1968 included a clear statement on Ecology. Our continuing concern is made clear on our latest Platform, passed in March 2014: "The same corporate forces and economic system that exploit and brutalize the world's working class people are destroying the world's biosphere. These social policies and ecological destruction often overlap. Socialism is necessary to end the ecological destruction caused by capitalism. Our goal is a society that is in harmony with nature as it is in harmony with its own people."

The date of the first Earth Day, April 22, was chosen because it coincided, approximately, with the Spring Equinox, long a time of celebration of the powers of our Mother Earth. It is no doubt purely a coincidence that it also coincided with the 100 anniversary of the birth of Vladimir Lenin, a National Holiday in the Soviet Union. Perhaps this is why the FBI sent its agents to spy on Earth Day activities around the nation in 1070. Perhaps also it is time to make Earth Day a subversive idea once again and realize that organizations such as NASA, Wells Fargo, Southwest Airlines, Reagan Wireless, and Chevrolet are no friends of the environment, even though they sponsor Earth Day.
And it is definitely time we make the rich and their corporations pay for the destruction they have caused to our planet and the people on it. That’s why our slogan on Earth Day should be: “End the Wars and Tax the Rich AND SAVE THE PLANET!”
Posted by Peace & Justice at 11:59 AM No comments:

Voters in California's 62nd District will have a socialist choice in the June Primary Election!
[http://mimiforstateassembly.wordpress.com] [https://www.facebook.com/RadandRedinLA] 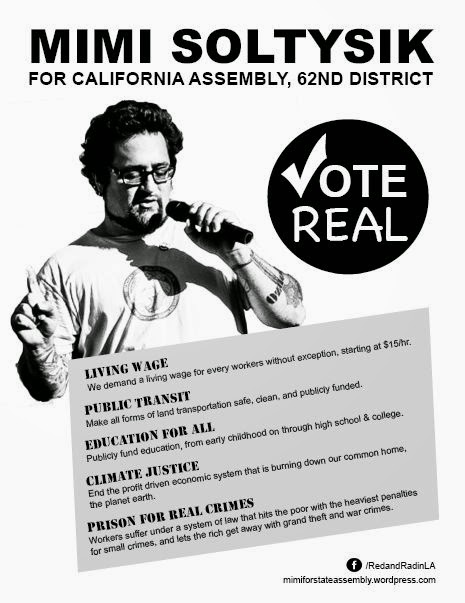 UCLA Government and Community Relations and Loyola Marymount University Government Relations wish to invite you to participate in a 62nd Assembly District Candidate Forum to be held Wednesday, April 30, 2014, from 6:00 p.m. to 8:00 p.m.  The forum will take place in University Hall on the campus of Loyola Marymount University (LMU), located at 1 LMU Drive, Los Angeles, CA 90045.
The purpose of this forum is to provide local residents and voters with the opportunity to familiarize themselves with the candidates for the upcoming 62nd Assembly District election and to help them determine who best represents their needs and interests.  It will also allow candidates to communicate to voters why they are the best-qualified to represent them in the California State Assembly.
Posted by Peace & Justice at 10:32 PM No comments: